Production vs Promotion: Which Should An Artiste Spend More On?

Less More
11 months 2 weeks ago #12618 by gospelnaija
Production vs Promotion: Which Should An Artiste Spend More On? was created by gospelnaija 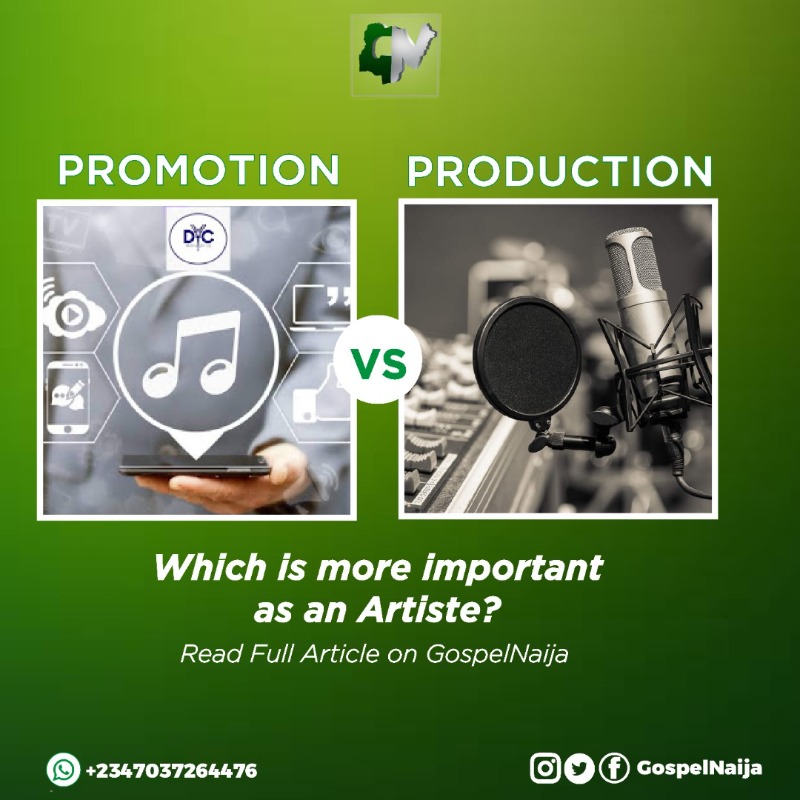 Being a recording artiste is most times filled with several responsibilities and numerous tasks that has to be properly done in order to have the maximum result. Often times, artistes have only stopped at the process of production while neglecting the place of promotion.

As an artiste, either emerging or established, you are to set budget for your brand which is your music at the release of any song or project. Artistes have often have issues with deciding about which of these they should spend more on: the production or the promotion? While I will not help you in deciding that, I can let you know that the two are very necessary when you are preparing the budget for your song.

As an excellent being, artistes especially gospel artistes need to put more excellence in their works and crafts. Questions such as how good is this song? What message am I trying to pass across? What do I want my listeners to think about me after listening to this song? What experience do I want them to have after listening to this? must be answered before the commencement of a production.

Some productions often cost much especially when it is a live production as the cost of employing back ups and other expertise might shoot up the budget but what is more important in your production is excellence.

PROMOTION AND ADVERTISEMENT
Meanwhile, a good production is not synonymous with a hit song. Your song or project might be good and only your family might end up being the only listeners because songs don't push themselves if you don't do.

One of those things that artistes need to understand is this. Your music is career should be seen as a brand just like every other products brand. You are the product. Your song is the product and nobody will know about a product if it not advertised. While in the business world, they use advertisement, in the entertainment community, it is called promotion.

Promotion is simply putting yourself in the stage where people can get to know about what you do. Several business run a lot of commercials in order for the masses and community to be able to see what they do. You see them adopt several methods and strategies in order for people to see the product and get engaged with it. Just like that artistes need to let the people get aware of their products either through blogs promotion, radio plays, TV pushs, Interviews, Social media Challenges and several other ways.

BAD SONG, GOOD SONG, HIT SONG
Several years ago I saw a statement which has been adopted by me and I think it will be useful for you too.

A well promoted bad song will do much better than a bad promoted good song. Good songs doesn't make Hit songs. Good songs only become hit songs when they are promoted well.

SET BUDGET FOR YOUR PROMOTION
As an artiste, always have a budget for your songs. Aside putting your songs on digital stores which is called Distribution, you should set a budget for pushing the song to platforms where it can be heard and new people that haven't known you can get to start loving you and your song.

Often times I have seen well established artistes spend so much on their songs. The likes of African super stars like Davido, Wizkid and those in the gospel community like Nathaniel Bassey, Sinach spend huge on their songs promotion just because they need to get it across to where it can be listened to. Another quote I often say is people listen to what they consistently listen to. The more a song is being seen on blogs, played on air or seen on social media, the more the song keep thriving.

Make use of platforms that are well established to push your songs. Blogs are one of the paramount tools to use when it comes to this. Blogs such as GospelNaija even offers creating a Catalogue in their websites for your songs which often increase your chances of being seen by the christian community. If you are a secular artiste, making use of platforms such as Naijaloaded, Pulse or working your ways with Classichord can help you in getting ahead of others.

Promoting your songs on blogs such as GospelNaija who has been in existence for more than a decade gives you increased SEO, brand awareness and brand identity.

In conclusion, promotion is essential but promotion might be more essential when it comes to your music career. Even with a bad song, you can still make a good result if it is promoted well. It is never enough to spend so much on a production, set budget for a good promotion. You can work with a promotion team like GospelNaija if you are confused about where to start and let them create a Catalogue for your music brand.