Now Every Parent Wants Their Kids To Be Like Neymar. But It's Wrong!

Less More
4 years 9 months ago - 4 years 9 months ago #4215 by oyez
Now Every Parent Wants Their Kids To Be Like Neymar. But It's Wrong! was created by oyez
I love Football and Humour. Two things I really enjoy.
One thing I despise is Ignorance.
How do these 3 relate? You might wonder. 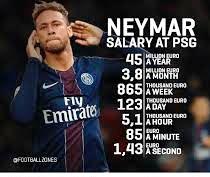 Since Neymar's record breaking transfer fee signing from FC Barcelona to PSG, plus the breakdown of the humongous amount he's set to earn, making him one of football's most expensive player, my social media timeline has been awash with witty posts about how people wished their parents never stopped them from playing football and how they will ensure that all their kids become footballers.

Funny as these posts are, I hope they only remain as jokes. Not to be taken seriously. This is simply because they exude a high level of ignorance about wealth and financial matters.

I don't have any problem with football (I've already stated my love for the game above) as I still nurse an ambition to play professionally some day, which seems near impossible. I just think we should aspire more and encourage our children to do same because our jokes are a part of our consciousness (why it is called "Sense" of Humour) and become they can become reality.

So instead of aspiring that our kids become well paid footballers (or workers for other people's companies) like Neymar who now plays/works for PSG, why not aspire for them to be like football club owners who buy and sell these players and pay them salaries?

I don't see people making jokes about how their children will grow and become like Mark Zuckerberg and Bill Gates. People who really have this money, massive employers of labour and are global influencers.

Take Mark for example, he has 3 major social platforms that we know of. Social networking sites Facebook and Instagram and Instant Messaging app WhatsApp and he isn't stopping there. Neymar has millions of followers on these (Mark's) platforms, which is only a fraction of what Zuckerberg controls.

My question is, "Even if we want to joke, can't we be expensive about it and joke that our children will learn coding and become heavily rich and influential or develop solutions that will change the world and make it a better place?"

I think people just like the "paparazzi and feferity" of things rather than the substance. It matters to them that Neymar is in their face every weekend and they don't realize how their face is in Mark's book every second of their lives. Pun unintended.

Just last week, I asked the teenagers I play football with occasionally who the richest footballer was, most chorused "Ronaldo!", others said it was David Beckham. They were surprised and doubtful when I told them "None of the above" was the answer. When they inquired to know who the wealthiest football player was, I told them the answer was simply "FLAMINI". Remember Mathieu Flamini, the French defensive midfielder that plays(played) for Arsenal FC. Yes. He's worth an estimated 20 Billion Euros. That's even more than many football clubs and their owners put together.

One might argue that it's not football money, but that's the point. Footballers' worth are not just their salaries on the field of play. It also covers their endorsement deals, image rights and other investments, hence Flamini personal business and company qualifies here. Let's find out how he made that much money and we'll see that Education is still the key!