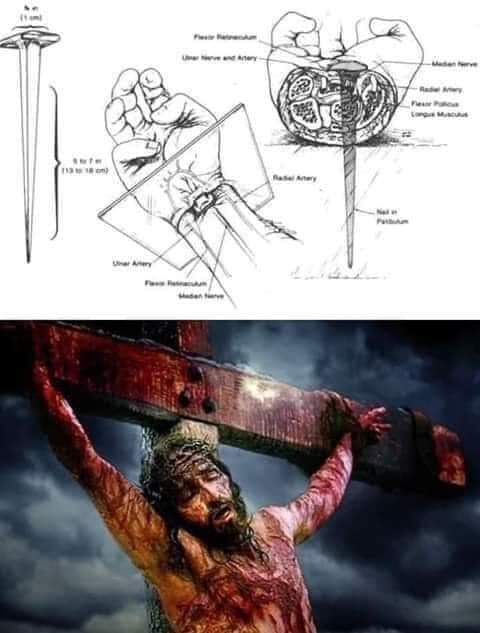 For the next 60 seconds, put aside whatever you are doing and take advantage of this opportunity.

At the age of 33, Jesus was sentenced to death.

At the time of The Crucifixion, it was the "worst" death.
Only the worst criminals were sentenced to be crucified. However, it was even more terrible for Jesus, unlike other criminals sentenced to death by crucifixion, Jesus should be preached on the Cross by his hands and feet.

The nails were built into his wrist,
Not on his palms as is commonly depicted
There is a tendon in the wrist that extends to the shoulder. Roman guards knew
that, when the nails were being inserted into the wrist, the tendon would tear and break,
forcing Jesus to use his ribs for support so he could breathe.

His two feet, They were inserted together, that's how he was forced to
lean on the only nail that tied his feet to the cross.
Jesus could not support himself with his legs because of the pain.
So he was forced to alternate arcing his back
He wore his legs just to continue his
breathe, Imagine the struggle, the pain, the suffering, the courage that endured it.

Jesus endured that reality for more than 3 hours.

Can you imagine this kind of
Suffering? A few minutes before he died, Jesus stopped bleeding, water just flowed from his wounds.

From common images we see wounds on his hands and feet and even the spear wound at his side ...
But we find out that his wounds were actually made all over his body by a mallet driving large ones through the wrist, the feet overlapping and an even large nail hammered through the arches, then a Roman guard piercing his side. with a spear. But before the nails and the spear, Jesus was whipped and because the lashes were so severe that they broke the
Flesh of his body, the beating so horrible he received on his face that it was ripped off and his beard ripped from his face.
The crown of thorns embedded deep into his scalp. Most men
he would not have survived this torture.

I had no more blood
To bleed, only the water gushed out if their wounds
The adult human body contains about 4.5 liters (a little over a gallon) of blood.

Jesus shed all 4.5 liters of his blood; had three nails inserted into its
members; a crown of thorns on his head and, in addition, a Roman soldier buried a spear in his chest.

All this not to mention the humiliation he suffered after wearing the
He crossed for almost 2 km, while the crowd spat in his face and threw stones at him (the cross was almost 30 kg in weight,
Only for its highest part, where your hands were.
(Turbot)

Jesus had to endure this experience, to open the Gates of heaven, so that you can have the
Access to God.

So that your sins
May they be "washed" and carried away. All of them, without exception!
Don't ignore this situation.

Jesus Christ died for you!

He died for you! It's easy to pass jokes or silly photos via email, but
When it comes to God, sometimes you feel ashamed to move forward.
To others because you care about what they might think about you

Confess Jesus as your only and sufficient Savior The Bible says: "The word is with you, in your mouth and in your heart; this is the word of faith, what to preach, namely: If with your mouth you confess the Lord Jesus, and in your heart you believe that God raised him from the dead, you will be saved Jesus said I am the way the truth and the life and no one comes to the father except for me.