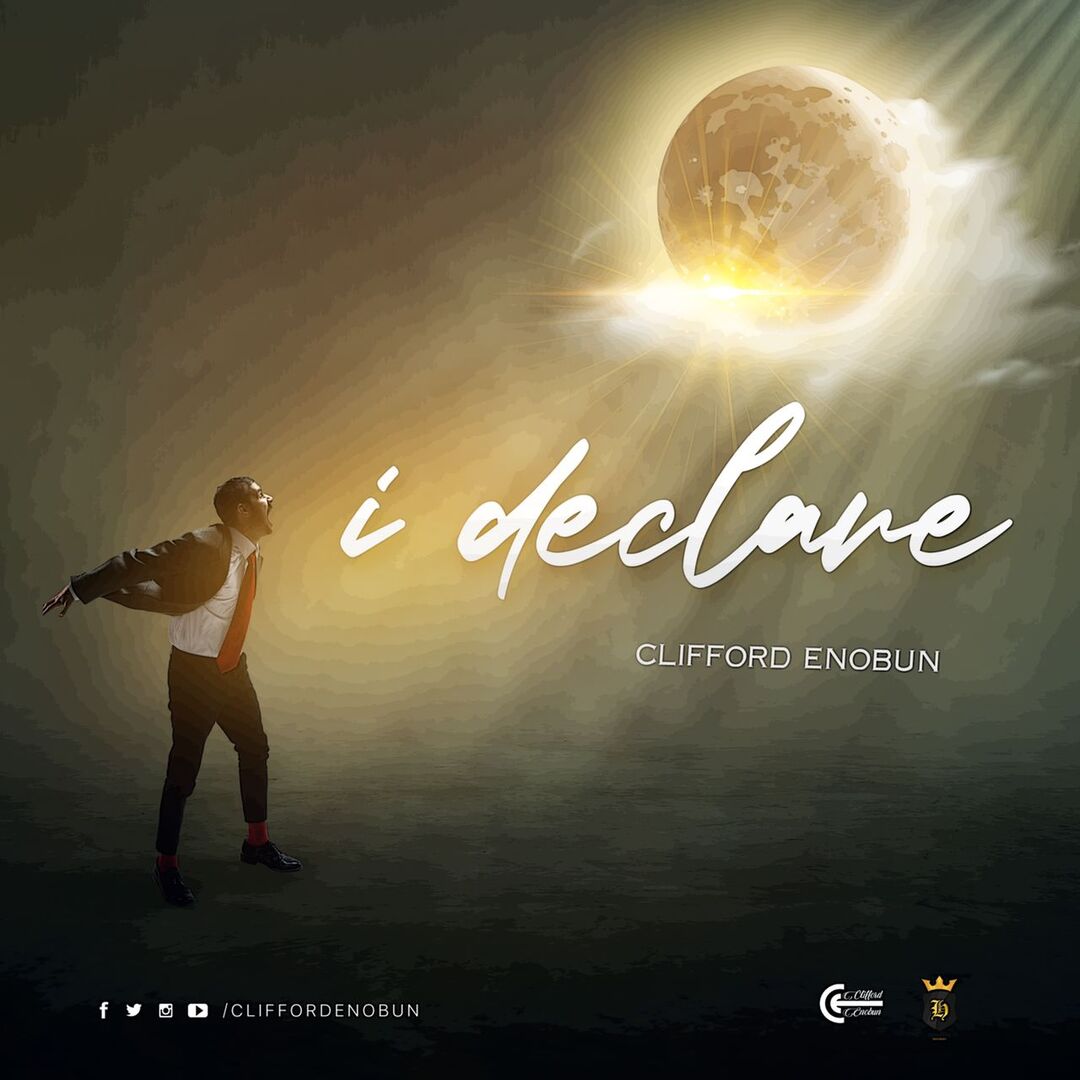 In Christendom today, there's one universal truth that has been established --- "the finished work of Jesus Christ".
In his first single of the year 2022, prolific singer-songwriter Clifford Enobun beautifully crafts this powerful song titled "I DECLARE" with the help of award-winning producer Gbade Adetisola.
This song reiterates the reality of every believer in Christ Jesus as 'God's love interest'; this is the song to sing to fill up your love tank from God and shun the lies and condemnation of the devil.
I Declare is "The Believer's Anthem", a must-listen for everyone.
One thing is certain, you can trust Clifford to make songs that are pleasant to the ears, yet able to enrich the soul.
Be blessed.

LYRICS: I DECLARE by Clifford Enobun
VERSE 1-
On the cross, You made me whole
Your death became my very life
You covered me, forgave my sins
And Your love became my rock

VERSE 2-
Yes Your word, my very source
The fountain of grace and truth
Your boundless love none compares
All my flaws, you ignored them all

PRE-CHORUS-
And all the chains, that held me down
You broke them all. I'm one with You

Clifford Enobun Profile
Clifford Enobun also known by the mononym CLIFFORD is a Nigerian recording Christian/Gospel music artist; a versatile vocalist, songwriter & worship-leader who hails from Benin, Edo state but born and bred in Ibadan, Oyo State on the 13th of May 1993. He is popularly known for his outstanding vocal ability, anointed & passionate music performances.
The self-proclaimed church-boy has had an impactful sojourn in music from an early age ministering with several choral groups across the country such as Levites (Christ Ambassadors International College), Hallelujah Voices (RCCG Paradise Parish), NSTHC (RCFUI), Sound of Cedar (RCCG Oyo 4), True Worshippers (RCCG Jesus Academy) and New Wine (Global Harvest Church Agodi). He is the pioneer of the annual music concert tagged “ENCOMIO” in Ibadan and the convener of “A CLIFF CHRISTMAS” concert.
Ever since his childhood, his gift and passion for music and art in its totality were never in doubt and it was meticulously nurtured through the music oriented schools he attended. It’s no surprise that his music through the years shows the depth of love and worship for God.
He made his debut in 2014 and has released numerous songs and videos, garnering more than a million cumulative downloads and music streams. His 2017 debut Extended Play EP titled ‘Love And Worship’ is tagged as a multi-genre masterpiece by local reviewers who were impressed with the diversity and excellence. He has also steadily built up a huge following online and boasts of more than 15,000 fans across all social media platforms.
He is also a medical doctor per excellence, and combines both an ever-demanding music career and hectic professional medical career with such a remarkable efficiency.
With the need to contribute his quota to the development of the music industry and having learnt from his challenges of being a music artist, he established Hebron Records in the year 2018 to bridge the gap between young, promising artists and the populace and help them achieve the greatest heights in their music career.
His musical influences include a variety of artistes: Kurt Carr, Marvin Sapp, The Clark Sisters, Tye Tribbett, Donnie McClurkin, Donald Lawrence, Yolanda Adams, CeCe Winans, Hezekiah Walker, Fred Hammond, William Murphy III, Luther Vandross, Beyonce Knowles, Whitney Houston, Michael Jackson, Jennifer Hudson, Christina Aguilera, Fantasia Barrino, Mariah Carey, Celine Dion & Chilayo.

People in this conversation